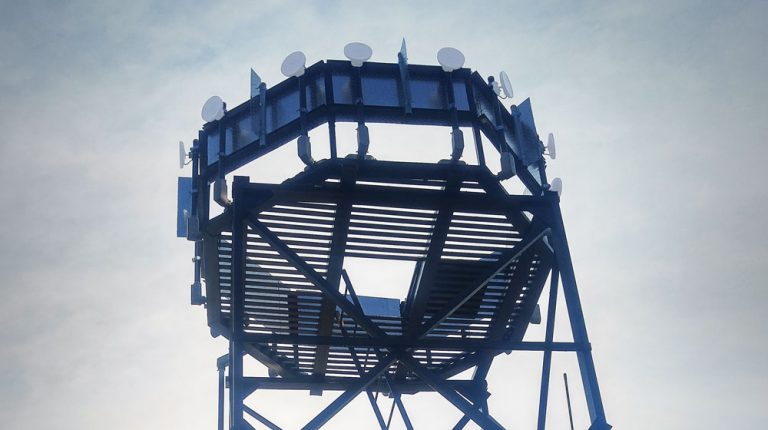 Recently HSI was tasked with creating a wireless surveillance network for a large apartment complex located in the heart of Brooklyn, NY. The complex encompasses 59 red-brick buildings distributed across 30 acres (7 city blocks). It sits in a neighborhood struggling to create a safer, more stable image for itself, so security is important. Robust, reliable Wi-Fi was required to support hundreds of surveillance cameras.

HSI’s experience on a previous large job indicated that for such an expansive site, wireless coverage would be more efficient than fiber cable, eliminating the time and expense required to run cable across long distances. So they prepared to implement a robust, flexible wireless solution with point-to-multipoint functionality.

The Solution: EnStationAC from EnGenius
Toivy Braun, a technician for HSI, says HSI had previously deployed EnGenius products successfully, so the EnStationAC was a logical choice for this project. The EnStationAC is a 5 GHz high-powered long-distance 11ac wireless outdoor AP/ client bridge offering dual-PoE Gigabit ports and a high-gain directional antenna that emits a narrow signal beam, limiting interference and ensuring stable connectivity, high bandwidth and 867 Mbps speeds over long distances. Working with EnGenius Technologies, HSI developed a plan. Sixteen EnStationAC point-to-multipoint access points were deployed atop a central tower, in WDS Bridge mode.
Each of these communicates with up to four corresponding EnStationACs throughout the complex (one or more per building), providing the wireless connectivity that is the backbone of the new surveillance system.

In total, the EnGenius system powers and connects 975 surveillance cameras in and around all 59 buildings. Cameras watch over the entire complex; entryways, stairwells, hallways and building exteriors. Because

The Results: Strong, Reliable Signal Supports Wireless Surveillance System Now, the large Brooklyn apartment complex has one central Wi-Fi surveillance network that is monitored from its command center. Video feeds are monitored for suspicious activity, and recordings provide evidence of wrongdoing if crime does occur.

Coverage is reliable and footage is smooth, capitalizing on the stable connections enabled by EnStationAC’s narrow, highstrength signal beams. Braun says there have been “no issues” with the EnStationAC coverage, and that “if you ever run into a problem (which you shouldn’t) the customer service is the best ever.” As EnStationAC is considerably more cost-effective and less time-consuming to deploy than cable connections, HSI has continued to use its to create powerful, flexible wireless networks for other clients. Braun says, “We are a proud EnGenius customer and I would recommend EnGenius products to absolutely anyone I know.”

<<< Back To Case Studies

Stay up to date with our latest news and products